Contesting usually involves a competition to see who can contact the most stations in a set period of time on certain bands and within specific rules.[1] Awards are sponsored by national amateur radio societies, radio enthusiast magazines, or amateur radio clubs, and aim to promote activity, and promote good operating practices on the amateur radio bands.

Each award has its own set of rules and fees. Some awards require the amateur radio operator to have contacted other stations in a certain number of countries, Maidenhead grid locators, states, or counties, etc.  Because amateur radio operators are forbidden by regulation to accept financial compensation for their on-air activity, award recipients generally only receive a certificate, wooden plaque, or a small trophy as recognition of their award. 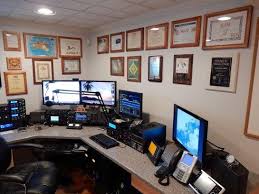 Most amateur radio operating awards require that the applicant submit proof, such as QSL cards, of the contacts which satisfy the requirements of the award. 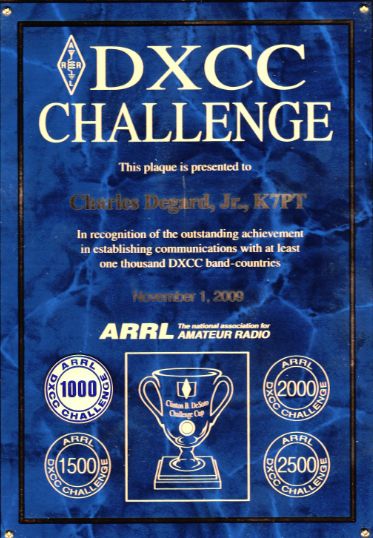 There are thousands of operating awards available. The most popular awards are the Worked All States award and the Worked All Continents award, and the more challenging Worked All Zones, DX Century Club (DXCC), Islands on the Air (IOTA) and VHF/UHF Century Club (VUCC) awards. DXCC is the most popular awards program, initially requiring amateurs to contact 100 of the 340 (as of 2015) separately designated countries and territories (“entities”) in the world.

Other popular awards include contacting remote islands, beaches, US counties, and lighthouses. Many awards are available for contacting amateurs in a particular country, region or city. Summits On The Air, or SOTA, tallies points towards awards to hams who broadcast from mountain elevations or make contact with those transmitting from them, for which events are scheduled periodically. Another popular “On the Air” activity, is called “Parks On The Air” where operators set up at various State and Federal parks around the country.

Many amateurs also enjoy setting up and contacting special event stations. Set up to commemorate special occurrences, they often issue distinctive QSLs or certificates. Some use unusual prefixes, such as the call signs with “96” that amateurs in the US State of Georgia could use during the 1996 Atlanta Olympics,[2] or the OO prefix used by Belgian amateurs in 2005 to commemorate their nation’s 175th anniversary.[3] (Not surprisingly, there are also awards for working sufficient numbers of prefixes.) Some events are held annually such as Guides on the Air and Jamboree on the Air. Many amateurs decorate their radio “shacks” (the room where they keep their radios) with these certificates. 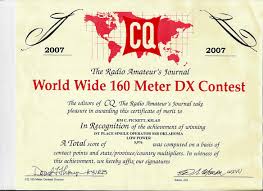 Another fun activity in amateur radio is pursuing operating awards. There are a wide variety of awards that you can earn that result in a nice certificate (suitable for framing) to recognize the achievement. These certificates are often referred to as “wallpaper” and some radio hams do cover their ham shack walls with these awards.

Typically, you’ll need to obtain confirmation of the radio contact, either in written form (a QSL card from the other ham) or via an electronic QSL system such as Logbook of the World or eQSL. Some awards just require you to submit a list of radio contacts, including date/time, frequency, call sign worked, etc. The confirmation requirements vary considerably so be sure to read the specific rules for the award you are pursuing. There is often a nominal fee for processing the award.

Worked All States (WAS)

The ARRL offers the Worked All States Award for confirmed contact with all 50 U.S. States.  This is a good award to start out with since most hams on HF will be able to accomplish this without too much trouble. Smaller or low population states such as Rhode Island and New Hampshire may be a challenge to find but persistence pays off. 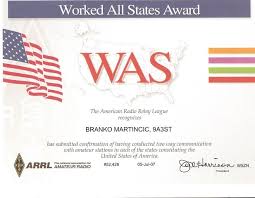 The Worked All Continents Award is offered by the International Amateur Radio Union (IARU)  and is administered in the US by the ARRL. As the name implies, you need to work all of the continents to qualify for this award. For this award, the continents are defined as: North America, South America, Africa, Oceania, Asia and Europe. Note that Antarctica is considered part of Oceania, along with most of the Pacific islands including the Hawaiian Islands. This list at the ARRL designates the continent for all countries around the world. WAC is actually not that difficult of an award as long as you have some good propagation on the higher HF bands (20m, 15m and 10m). Africa is usually the most difficult from North America, due to the distance and the lower population density. 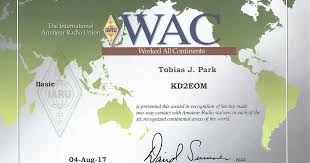 You might think there would be a Worked All Countries Award but instead we have the DX Century Club. The name “century club” indicates that you need to work 100 countries to qualify for the award. Oh, I should say “entities” which is the proper DXCC terminology for “countries”. What qualifies as an Entity is a bit complicated and is subject to some debate. For example, Alaska counts as a separate country, I mean entity. For more on this, see Is Alaska A Country? 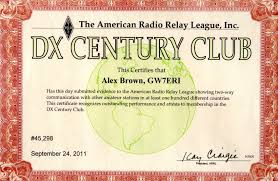 The VHF equivalent of DXCC is the VUCC award, which is based on working maidenhead grids on a particular band above 50 MHz. To qualify for 50 MHz VUCC or 144 MHz VUCC, you need to contact 100 different grids on that particular band. Fifty grids are required for 222 MHz and 432 MHz, and even fewer grids for the higher bands. There is a Satellite VUCC award for satellite contacts, starting with working 100 grids. 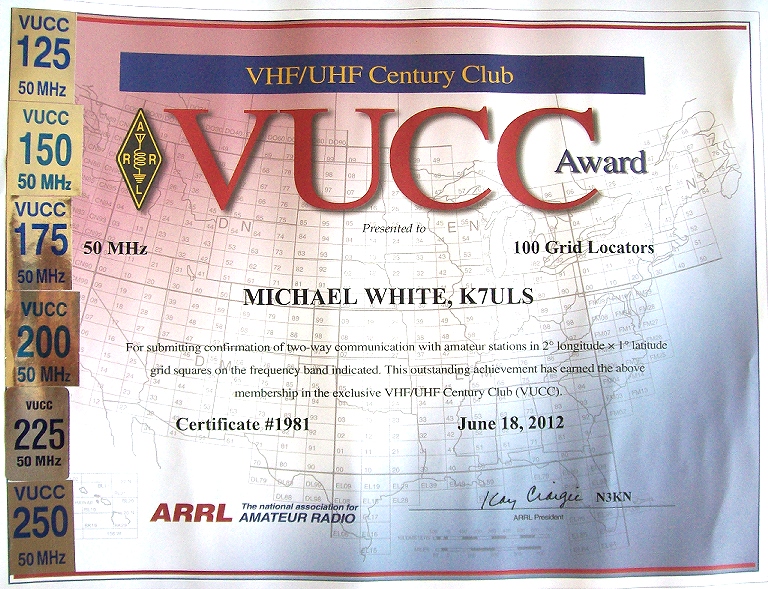 Summits On The Air (SOTA)

Another interesting set of awards is associated with the Summits On The Air (SOTA) program. SOTA offers quite a variety of awards for working or activating designated summits but the two main awards are: Shack Sloth (for obtaining 1000 points by contacting summits) and Mountain Goat (for obtaining 1000 points by activating summits). There is a points system that relates to the elevation of the mountain, with higher summits generally having more points. 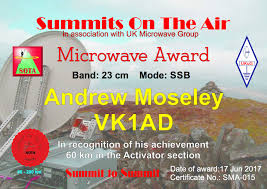 There are so many awards out there, I cannot begin to list them all. It seems there is an award for every interest and every person involved in ham radio. Check out the DX Awards web site by K1BV to see a listing of many of the awards available.

So consider chasing some awards to provide a focus for your ham radio activity. It can be a lot of fun and provide a sense of accomplishment.